Tim Fasano Bigfoot back on the trails

This was back in the spring before I got sick. I am back on the trails but in not to good of physical shape. I went into the gym today for the first time since July. It felt good to get in a good workout. 3 days a week is all you need. You just have to stay with it. Don't worry. I will. I am extremely motivated. You got to be in good physical condition to look for Bigfoot. That is the truth.
at January 08, 2018 No comments:

Tim Stover back in action


Tim Stover slowed down a lot the last couple of years. Things must be lining up for him to get back to full time Sasquatch hunting for I am seeing more videos from him. I am very glad about this on a personal level. Tim began Bigfoot hunting about six month before I did. This is why he is the original YouTube Bigfoot guy.

Unfortunately, YouTube has been taken over by hoaxers. In my opinion, the top 5 sites on YouTube are straight out hoaxers. Some are more subtle than others but they are all fakes. It was not that way when I started almost a decade ago. Tim brings back a lot of good memories for me.
at November 10, 2017 No comments:

Sunset on a Bigfoot expedition

George and I had an opportunity to go on an overnight at a primitive camp in the swamp. The weather could not have been better. November is the time of year to do this. I had a few objectives in mind. I wanted to get into a protected swamp area that is closed to hunting. I also wanted to try out my new Canon Night Vison function on my camera. Plus, just wanted a nice camping trip.

The maintenance of the camp is something I could do without.

Mark Zaskey and his hundreds of Bigfoot


I am new to Mark Zaskey but the videos I have seen are full of him talking nonstop and zooming in on light and shadow in the bushes and telling us that its Bigfoot. I was waiting for his video to get moving, like heading into the woods. But all he does is just talk about what they found. I would like to see the live shots. Maybe they exist and I've just not found them yet.

Forget about his over use of ads on his videos; forget about his disabling all ratings and comments; forget about disabling of embedding; he needs to back up this claim about area 4E (???). If he can't, he is a joke. I really won't say he's a hoaxer because I'm not really sure just what he's hoaxing. Perhaps its just like Mountain Monsters and he is just doing what the TV shows are doing.

That means we have moved into a new ethical era where all about ratings and hits. Just like the Clintons ethics....its all about what you can get away with and how you sell it. Simple.

Robert Dodson and his Bigfoot in the bushes nonsense

This guy seems to see Bigfoot wherever he goes. He shows still photos of foliage and points to shadows and says they are Bigfoots. It gets even better. He actually knows how tall they are and by what rate they are growing each month. This is because he interacts with them and knows them on a personal level. I raise a critical eyebrow on this and would rather believe this is all a product of an overactive imagination trying to get subscribers on his site. Don't believe one word of it.

Notice these guys only show photos when all they do is run video. Makes you wonder.

Halloween is the perfect time of year to kick start the Skunk Ape season in Florida. It is the beginning of the cool weather and it's migratory season for the cryptids. Our best evidence has consistently been found in the Fall and Spring migratory range. Go to www.enigmaticanomalies.com and www.floridabigfootinvestigators.com for more info. Kevin Thomas Kehl produced and edited the TV version of this. He did a great job and check out his sites.
at November 01, 2017 No comments:

Time Lapse in a Bigfoot area

This is a time lapse along the power line corridor. The theory is Bigfoots use it for crossing since they use the things that man has made.

Expanding on what Grover Krantz said about the problem with Bigfoot


Dr. Krantz believed the evidence for Bigfoot was a physics problem. This was an issue I explored in this video from 2009. Man really does have limitations with his scientific method.
at April 14, 2016 No comments:

George and I went to the Citrus Track a few years ago and I just found this lost footage. We had a camp for the night and used the forest roads to get 15 miles into the area. Very cool back in there.
at April 10, 2016 No comments:

2016 will be a good year for Skunk Ape research


Many changes in my personal life will make my research so much better. Many opportunities are opening up. A new living situation is working to my advantage. 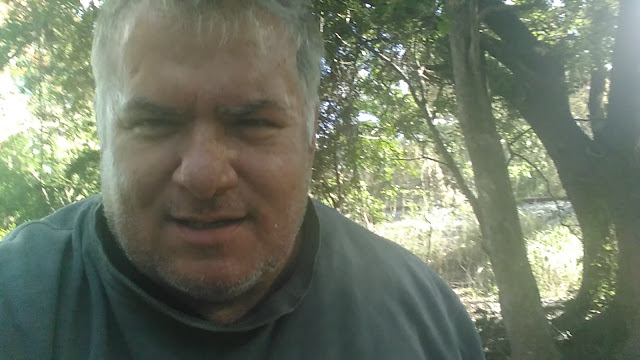 
A new video just posted on Facebook about Skunk Ape Safari.
at January 18, 2016 No comments:

A video test of an app 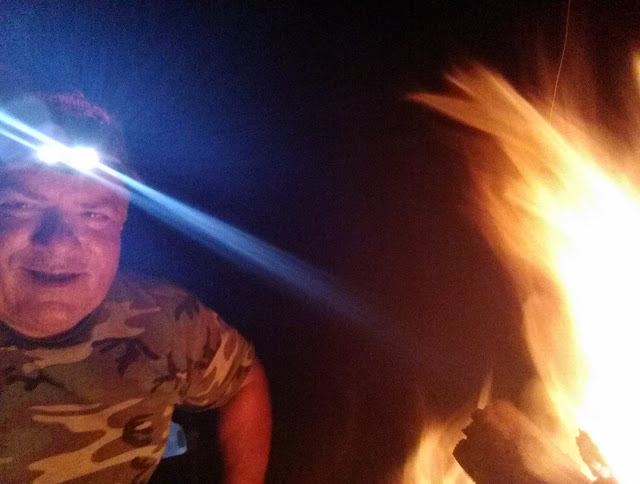 George and I were on the Xmas Bigfoot hunt. We followed many game trails and all of them led to water. My theory is Skunk Ape ambushes prey at these sites.

A game trail and water

A game trail took me right to water. In a survival situation, always follow the game trails. 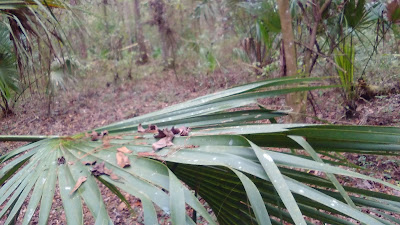 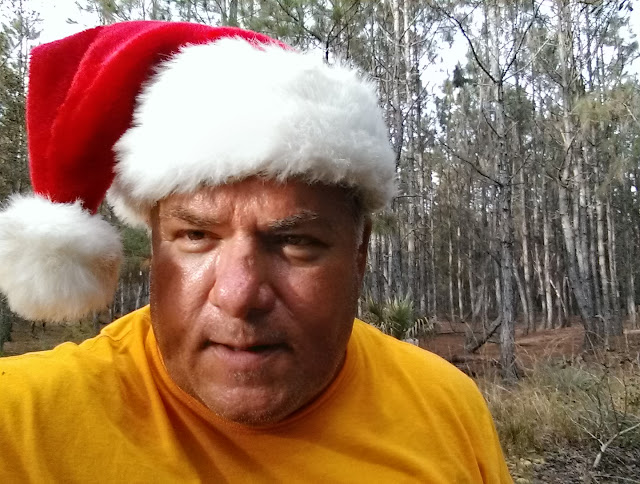 We went to the pine forest and swamp for Christmas holiday. There could be no better Xmas present than finding evidence of Bigfoot. George and I found an awesome campsite close to trails leading off into some cool areas. But first, George and I got caught up and started a fire. We only roamed for a little bit but mostly just hung out and enjoyed the holiday. 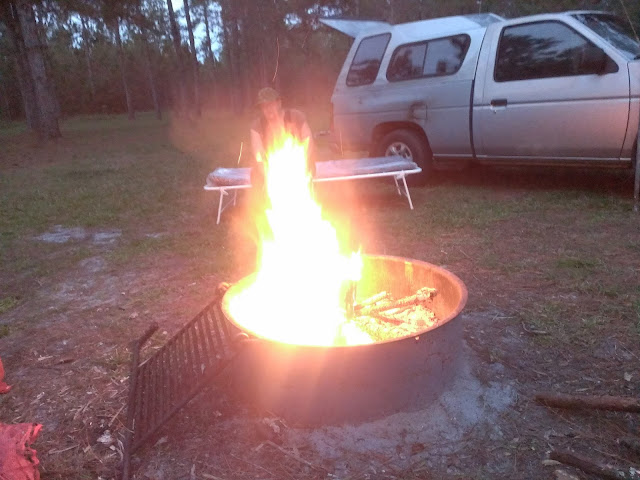 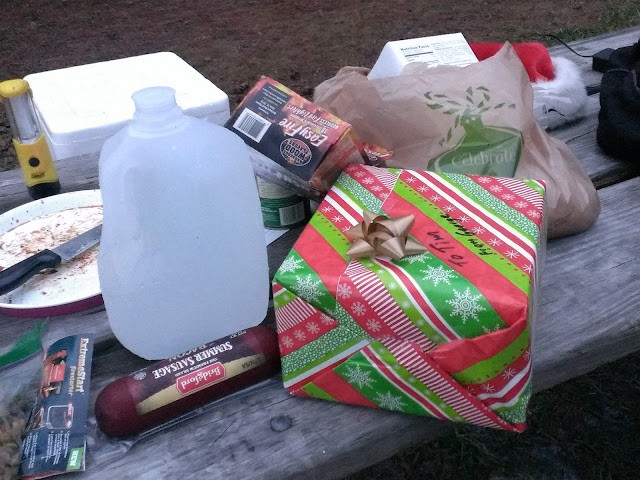 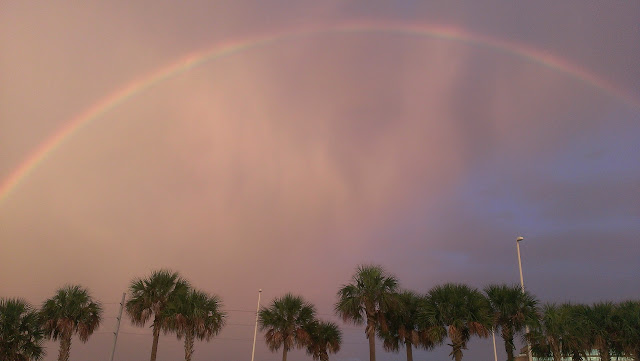 The first cold front of Autumn has reached Florida five weeks early and done so on my birthday (bringing a rainbow). Wednesday I should be back in field searching for the Skunk Ape. I should be active untill May. I am excited for our team has many great activities planned. Keep coming back to see what we find. 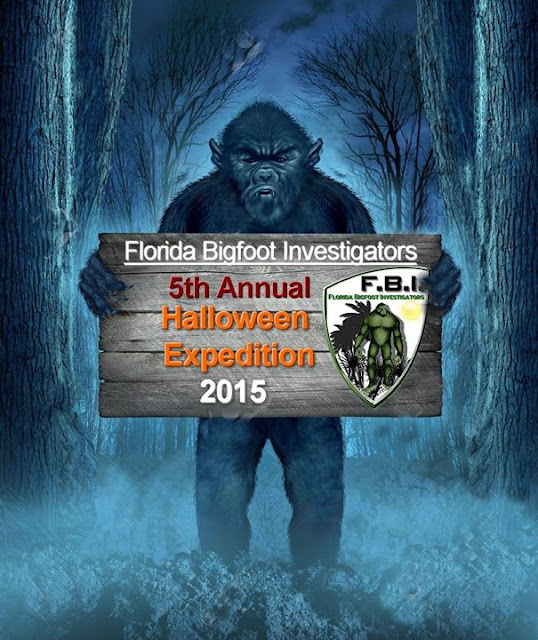 Details to come as Kevin Thomas Kehl works on the details of the Green Swamp expedition. This event has grown every year and I hope this will be the biggest yet. Its a lot of fun folks.

posted from Bloggeroid
at August 24, 2015 No comments:

Trail cams have been stolen

Kevin Thomas Kehl is going back to check on the new trail cam. Rob Robinson had two stolen recently and its strange that they were found. Paranoia can be a good thing.
at June 01, 2015 No comments:

Rictor Off The Rictor 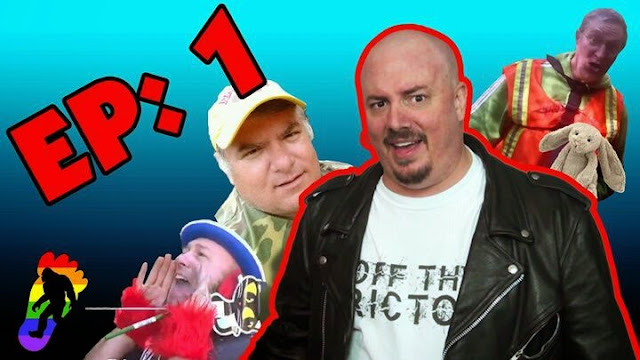 Rictor is now doing a camp ipod show about Bigfoot researchers. The first one he made fun if Tim Fasano (me) and Stacey Brown. He provided no insights into what we found at Myakka River. His show only underscores how Bigfoot is now just entertainment.

The reality of Lettuce Lake and Bigfoot

All of these images where taken in the swamps around Lettuce Lake Park. The only thing you need to ask yourself is would you go out here in a monkey suit? That is the only question. I think I know the answer. The Skunk Ape has adapted to this environment. You have not.

The most honest man in Bigfoot 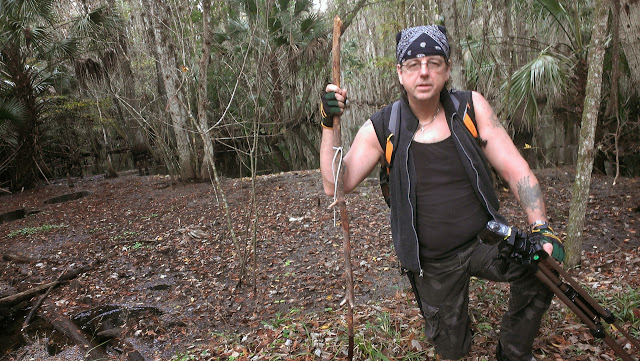 I had the pleasure of working with Kevin Thomas Kehl for a three year period. In fact, we worked exclusively together like we were joined at the hip. The seminar trolls continued to call me hoaxer, even though Kevin would not hoax under any circumstance. The Florida group he has formed will find real evidence and you can count on it being real. Nobody can question Kevin's integrity. Unfortunately, our lives have taken different paths and I am less of a researcher because of it. I could really use his help in the Lettuce Lake Project.

Tim Fasano is getting into iron shape

NOTE: next Skunk Ape season, I will be in iron shape. I am lifting weights 3 times a week. Also, swimming and running 3 times a week for extreme cardio. No more lagging behind on the trails. I will be leading the way. The easiest thing in the world is too give up. To do something for the 1,000 time, you must do it for the first time. Each day will ad on to what has preceded it. Success is building today onto what you have already achieved. When I was young I was always told that winners never quit. They were right - LOSERS Do.

I just listened to a radio show where Mike Alstot said with the Bucs under Tony Dungy it was all about Honor - Commitment - Integrity. Success cannot be built without it. 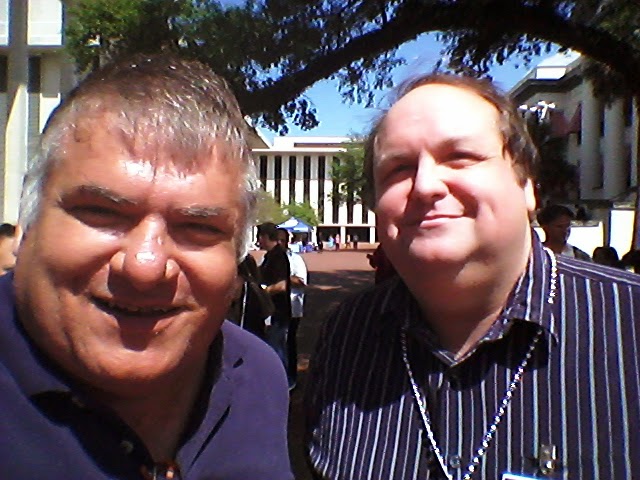 I was in Tallahassee (state capitol) for the Senate hearing on Uber. They are operating illegally in Florida, and must be stopped. A reporter from WFSU came up to me in the courtyard, and said

I started laughing. It seems he is a subscriber to my channel and believes in Bigfoot. How cool.

What is not cool is the power of the Uber lobbyist. I really think the game is now rigged against us. Uber will put us all out of business if they continue to operate outside the law. They don't abide by any regulations or have any medallions. Never thought I'd see this in my country. 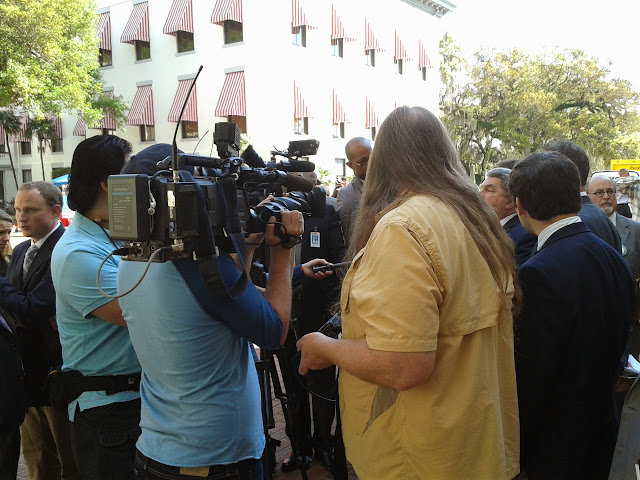 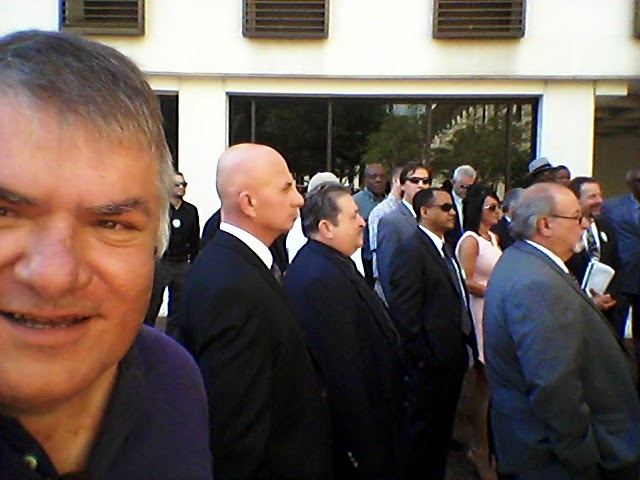 The reality of Lettuce Lake and Bigfoot

All of these images where taken in the swamps around Lettuce Lake Park. The only thing you need to ask yourself is would you go out here in ... 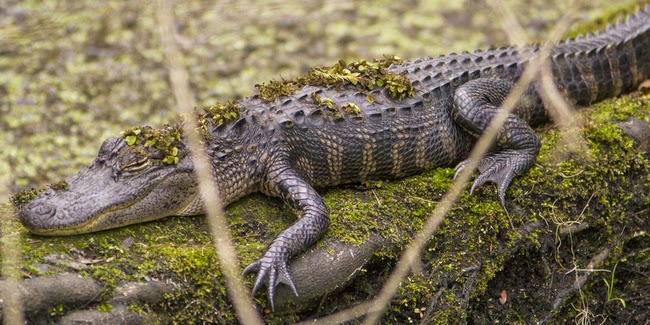 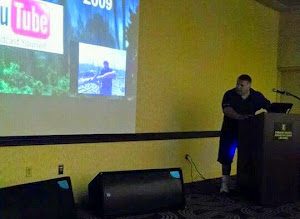 This is Tim Fasano speaking at the Florida Skunk Ape Conference. 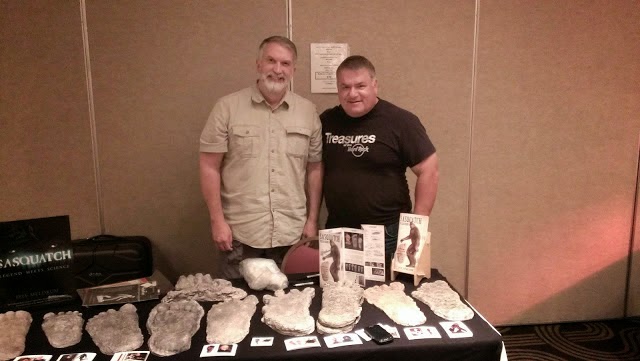 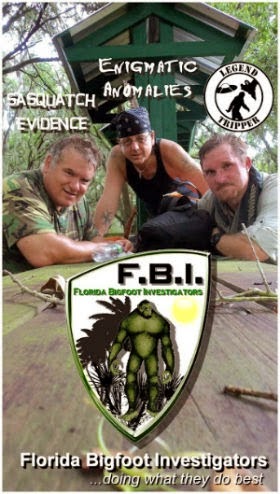 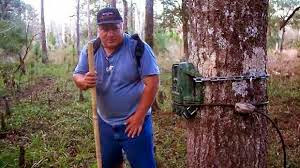 Me coming out of limestone cave

The Florida BFRO botched the investigation into this authentic Skunk Ape video. Yet,, BFRO would rather show those stupid videos on Finding Bigfoot.